It has a painful and centuries-long tradition that Romani children are taken away from their families. One weekend in September in Vienna (AT), a four-year old girl was taken away from her grandmother. The grandmother was begging on the street. The little girl was kept in state care for two days, in an institution where nobody spoke her mother tongue. By coincidence, Ulli Gladik, who speaks Bulgarian, witnessed the incident and reports:

Friday afternoon, a beggar – we ́ve known each other for quite a while – took me to a crying Bulgarian woman. The woman could barely speak; she was shaken about what had happened to her. Her brother-in-law told me about the incident: the woman, let’s call her Ms. Kostova, was begging in the afternoon, with her granddaughter sitting on her lap. The police took both to a police station where the child was taken away from her. Ms. Kostova was sent away without providing her with any information about what would happen to her 4-year old grandchild. There was no interpreter on site, who could have explained the further proceedings to Ms. Kostova. There was no one to calm down the little girl. END_OF_DOCUMENT_TOKEN_TO_BE_REPLACED 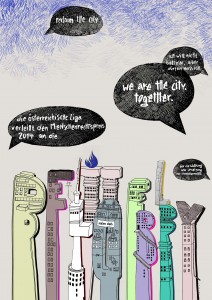